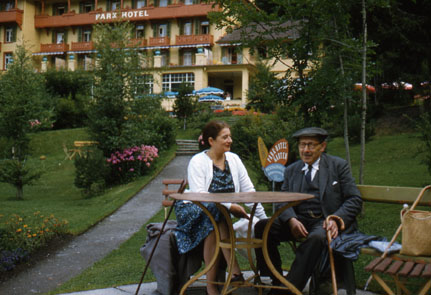 Guido Kisch outside the Park Hotel with his wife. Image courtesy of the Leo Baeck Institute.

In 1935 Kisch accepted the AAJR Research Fellowship and moved to New York City, where he taught Jewish history at the Jewish Institute of Religion/Hebrew Union College. In the 1950s, he served as vice-president of AAJR. In 1962, he returned to Europe and lived in Basel until his death in 1985.

For an example of Kisch’s scholarship, click here to view “Research in Medieval Legal History of the Jews,” published in the Proceedings of the American Academy of Jewish Research in 1934-1935.