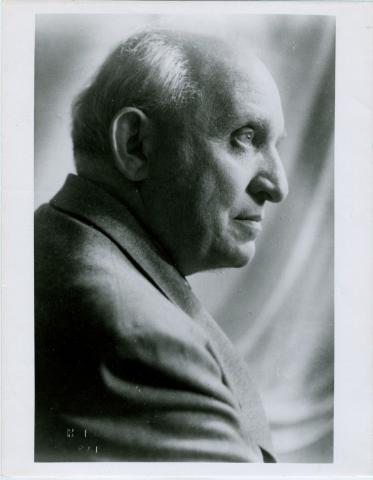 Salo Wittmayer Baron was a founding fellow and Executive Committee member of the American Academy for Jewish Research. He is recognized today as one of the leading Jewish historians of the twentieth century.

Born in 1895 in Tarnow, then part of the Austro-Hungarian Empire, Baron went on to be ordained by the Jewish Theological Seminary in Vienna and to earn three doctorates, in philosophy, political science, and law, respectively, from the University of Vienna. He was invited to teach at the Jewish Institute of Religion in New York in the 1920s, and in 1930 he became the first person to hold the newly established Miller Chair of Jewish History, Literature and Institutions at Columbia University. Baron’s eighteen-volume opus entitled A Social and Religious History of the Jews is widely considered a master work on the history of Jews from the ancient to the modern period.

In 1975, AAJR published a jubilee volume in honor of Baron’s eightieth birthday. Baron died in New York City in 1989.

For an example of Baron’s scholarship, click here to view “The Jewish Factor in Medieval Civilization,” published in the Proceeding of the American Academy for Jewish Research in 1942.