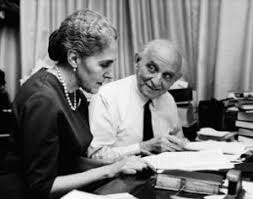 Jeannette Meisel Baron, wife of AAJR fellow Salo Baron, was a scholar of economics and history. Though she as not an AAJR fellow, she took an active role in helping Academy Refugee Research Fellows adjust to their new homes in the United States.

Jeannette Baron, née Meisel, was born in 1911. She pursued graduate studies in economics at the University of Columbia, where she met Salo Baron, professor of Jewish history, in 1933. They married in 1934. Jeannette and Salo Baron worked together on several academic projects, including a number of books. The Barons became known for their generous hospitality not only to American colleagues but also to the newly arrived AAJR refugee fellows.

For an example of Baron’s scholarship, click here to view “Palestinian Messengers in America, 1849-79: A Record of Four Journeys,” co-authored with Salo Baron and published in Jewish Social Studies in 1943. (Link connects to jstor.org).