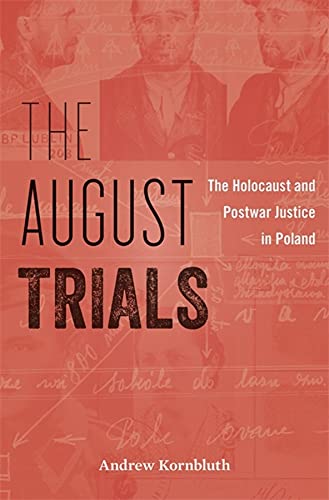 The American Academy for Jewish Research is pleased to announce the winner of its annual Salo Baron Prize for the best first book in Jewish studies published in calendar year 2021. The prize honors:

In The August Trials, Andrew Kornbluth examines a series of trials of Polish Nazi collaborators held in Poland during the decade or so following the end of World War II. Kornbluth demonstrates that far from being a tool in the hands of the Soviet authorities, these trials began as a genuine attempt to come to terms with the violence and murder committed by Poles under German occupation. With the passage of time, however, the trials became a site for creating a usable past for Poland, downplaying or even erasing Polish responsibility for the ethnic cleansing of Polish Jewry. The August Trials is a major contribution to the study of Polish-Jewish relations during and after the Holocaust, the search for justice in post-Holocaust Europe, and the nexus between history, memory, and politics in the 20th and 21st centuries.

Honorable Mention is awarded to Jason Lustig of the University of Texas, Austin for A Time to Gather: Archives and the Control of Jewish Culture (Oxford University Press). This is an innovative study of the establishment in the 20th century of Jewish archival institutions in Europe, Israel, and the United States. The author demonstrates how the creation of these archives involved a struggle not just to acquire the materials themselves but also to construct interpretations of both the Jewish past and present.

The American Academy for Jewish Research (www.aajr.org) is the oldest professional organization of Judaica scholars in North America. Its membership consists of senior scholars whose work has made a major impact on their field.