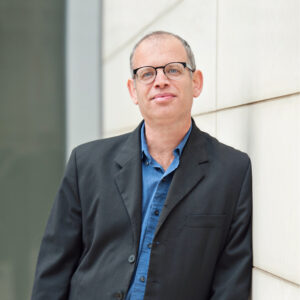 Shachar Pinsker was trained at the Hebrew University, GTU, and UC Berkeley, and was a visiting professor at Harvard and Ben-Gurion University. He has been teaching at the University of Michigan since 2003. His research and teaching focus on Hebrew and multilingual Jewish literature and culture in Palestine/Israel, Europe, and America. He is the author of Literary Passports: The Making of Modernist Hebrew Fiction in Europe (2011), winner of the Jordan Schnitzer Book Award, and A Rich Brew: How Cafés Created Modern Jewish Culture (2018), finalist of the National Jewish Book Award and winner of the Jordan Schnitzer Book Award. He is the editor of Women’s Hebrew Poetry on American Shores (2016), and Where the Sky and Sea Meet: Israeli Yiddish Stories (forthcoming), and co-editor of Hebrew, Gender, and Modernity (2007). He is writing a book on Yiddish in Israeli literature and culture, and co-directing the NEH supported research project: The Feuilleton, the Public Sphere, and Modern Jewish Cultures. He currently serves as Associate Director of the Frankel Center for Judaic Studies, and as Associate Editor of Prooftexts: A Journal of Jewish Literary History.