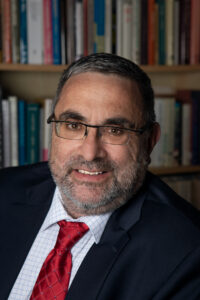 Adam Teller is Professor of Judaic Studies and History at Brown University. Receiving his first degree at Oxford University and completing his graduate studies at the Hebrew University of Jerusalem, he taught at the University of Haifa from 1995-2010. He has written widely on the economic, social, and cultural history of the Jews in early modern Poland-Lithuania. His first book, ‘Living Together: The Jewish Quarter in Poznań during the Seventeenth Century’ was published in Hebrew by the Magnes Press of the Hebrew University in 2003. His second book, ‘Money, Power, and Influence in Eighteenth Century Lithuania: The Jews on the Radziwiłł Estates’ was published first in Hebrew by Merkaz Zalman Shazar in 2005 and in an updated English version by Stanford University Press in 2016. He was a member of the core academic team that created the exhibit at the award-winning POLIN Museum for the History of Polish Jews in Warsaw. His most recent book, ‘Rescue the Surviving Souls: The Great Jewish Refugee Crisis of the Seventeenth Century’, was published by Princeton University Press in April 2020 and was a finalist for the 2020 National Jewish Book Award in History.

“Telling the Difference: Some Comparative Perspectives on the Jews’ Legal Status in Poland and in the Holy Roman Empire” Polin 22 (2010): 109-141.

“Hasidism and the Challenge of Geography: The Polish Background to the Spread of the Hasidic Movement,” AJS Review 30 (2006): 1-29.

The Jewish Quarter of Poznań and its Population in the First Half of the 17th Century (Magnes Press, 2003). In Hebrew.