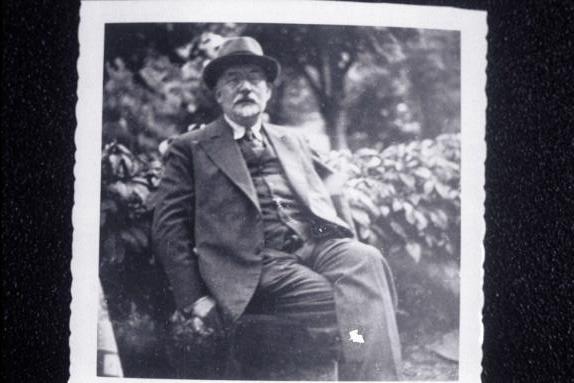 The second individual to whom the Academy awarded a fellowship in the immediate wake of Kristallnacht was Aron Freimann. Although AAJR had previously given fellowships only to younger men, they apparently relaxed their policy to accommodate Freimann, who was 67 years old in 1938.

Freimann had earned a doctoral degree from the University of Erlangen-Nuremberg in 1896, and from 1879 to 1933 he headed the Hebrew Department of the City Library in Frankfurt am Main. During the course of his twenty-five-year tenure at the library, he collected and catalogued the largest collection of Judaica and Hebraica in Europe. His worked gained him international recognition. In fact, he was already closely connected to AAJR leadership before being selected as a fellow. Alexander Marx wrote the introduction to a Festschrift published in honor of Freimann on the occasion of his sixtieth birthday.

Freimann was fired in compliance with the Civil Service Law in 1933, and in 1937 Nazi cultural officers closed public access to his collection. The following year, Frankfurt am Main’s mayor Friedrich Krebs offered to give the Nazis control of the complete Judaica collection if they would open an antisemitic research institute in the city. Alfred Rosenberg, Nazi Commissar for the Supervision of Intellectual and Ideological Education, agreed because he planned to use the collection as the foundation of his newly conceived Institute for the Study of the Jewish Question. So much competition arose over the question of who would gain control of the collection, however, that Rosenberg did not get full custody, and Freimann’s collection was divided and scattered across the German Reich.

Freimann avoided arrest on Kristallnacht due his advanced age, and he spent the next months intervening, unsuccessfully, on behalf of Jews who had been imprisoned. Only in April 1939 did Freimann and his wife Therese Horowitz finally abandon Germany for the United States with the support of AAJR. Alongside his AAJR fellowship of $1,000 per year, Freimann was awarded funding from the Emergency Committee and the New York Public Library and a teaching position at Yeshiva College. The Academy gave him the title of “Research Fellow in Hebrew Bibliography,” and in 1940 he began a five-year term as a research librarian at the New York Public Library. In 1942 he became a permanent fellow of AAJR.